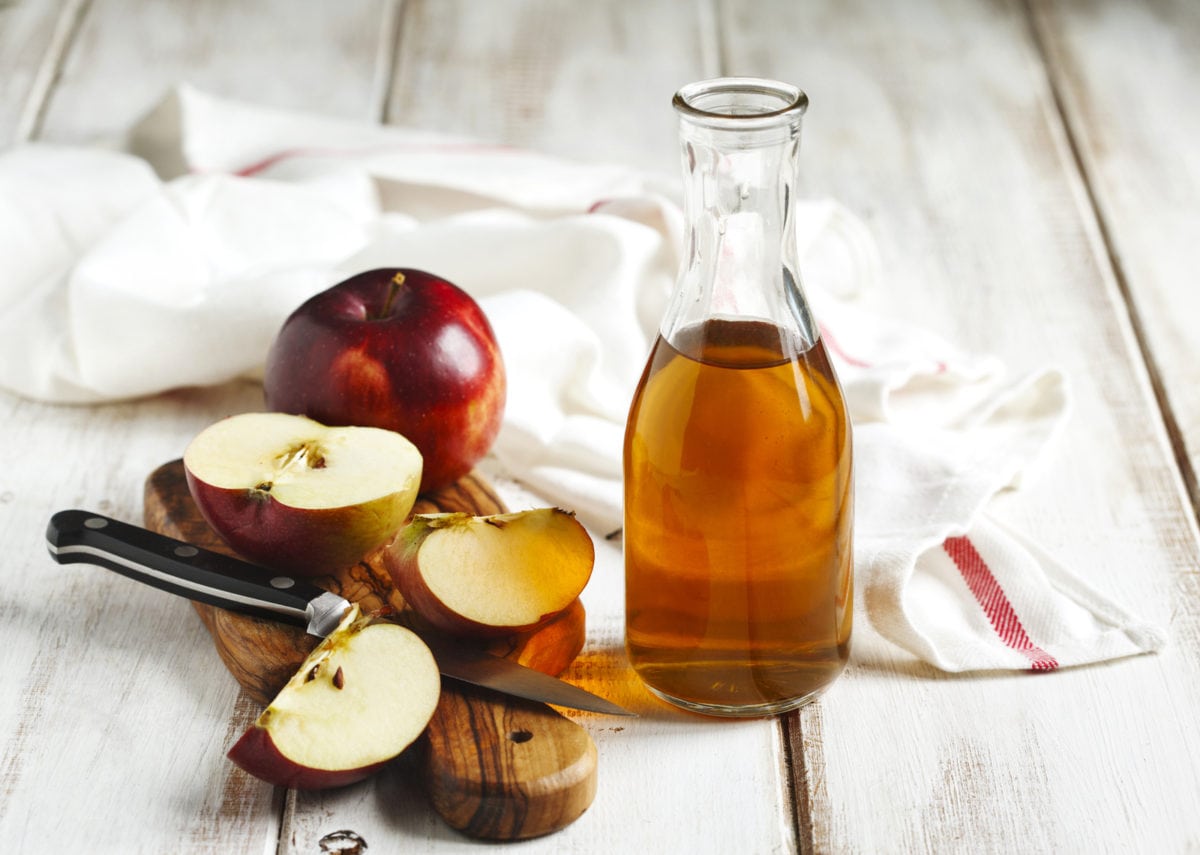 Acetic acid is bacteria found in vinegar and is a byproduct of the fermentation process, it helps your body absorb minerals better. During the process, the acetic acid grows inside the vinegar until it congeals into a nontoxic slime called the “mother.” Distilled vinegar removes the mother, but the raw, unfiltered vinegar does not. So far there is no scientific evidence backing up any benefits the mother may have, but it is responsible for the sharp taste of vinegar itself.

A study done at Arizona State University followed four men and seven women between the ages of 40-72 with type 2 diabetes. Of the participants, over 70% were on medication for blood glucose. In the study participants were given either water and a 1 oz piece of cheese right before bedtime, or apple cider vinegar and a piece of cheese. The study revealed that the fasting glucose was 6% less in participants whose glucose was over 130mg/dl. ACV can help regulate blood sugar and improve insulin resistance as well.

3. Can help with weight loss

The acetic acid in vinegar can also be an effective weight loss supplement, according to studies done by a Japanese team of researchers. In the first—done with mice—the mice were fed a high-fat diet, with one group being given acetic acid afterwards and the other not. The mice given acetic acid developed up to 10% less body fat than the mice that did not.

In the test done on humans, the subjects—175 obese but healthy people—were divided up into two groups. One was given vinegar, the other water. The group that was given vinegar lost up to an average of 1 to 2 pounds at the end of 12 weeks without exercise or any other form of dieting.

Apple cider vinegar contains chlorogenic acids that help lower LDL, or bad cholesterol, which prevents it from being able to crystallize in the bloodstream. A study, conducted on over 70,000 women, results found that an increased intake of oil and vinegar salad dressing reduced the risk of ischemic heart disease.

5. May be protective against cancer

While none of the studies have used ACV, it still is vinegar, and apple cider vinegar has been shown to shrink and kill some types of cancer cells. In a study conducted in China, it was discovered that vegetable and vinegar consumption reduced the risk of oesophageal cancer. Testing on humans is still in its infancy, but apple cider vinegar does contain acetic acid, which has anti-tumor properties, as well as polyphenols, which also have anticancer and antioxidant properties.

6. Can be used to combat allergies and congestion

Apple cider vinegar helps support lymphatic drainage and breaks up mucous in your body, which can also help drain your sinuses. It also supports your immune system. Mix with water (two tablespoons) and drink three times daily for allergy relief.

From UTIs to bad breath, candida, or yeast, affects millions of people daily. Apple cider vinegar contains probiotics that can help fight this. For a candida cleanse, remove sugar from your diet and drink 1 tbsp of apple cider vinegar daily.

8. Can reduce heartburn and acid reflux

Apple cider vinegar is acidic by nature, but once it is in the body it can neutralize acid, making it an effective natural heartburn and acid reflux fighter. Since the late 18th century, according to Carol S. Johnston, PhD RD, apple cider vinegar has been used to treat stomachaches. So the next time heartburn arises, mix 2-3 tablespoons in an 8 oz glass of warm water.

“An apple a day keeps the doctor away,” goes the old adage. Well, with apple cider vinegar (or ACV), you’re going to keep the doctor away for a very long time. The benefits of this product are numerous. An ancient folk remedy, apple cider vinegar has been used for centuries and has been tucked away in households for purposes such as cleaning and cooking. In the natural health community apple cider vinegar remains one of its most popular products, used as a natural wart remover and poison ivy treatment. Many of its health claims are backed by scientific research. In this article we explain twenty of those uses.

Proper digestion is a key to a healthy body, and apple cider vinegar added to your daily diet can help improve it. According to Jonathon Wright, MD, author of Why Stomach Acid is Good for You, as much as 90% of Americans don’t produce enough stomach acid. ACV will help rectify that. A glass of water with 1-2 tbsp of ACV in it before meals will help aid with digestion.

Anyone who has had kidney stones knows how uncomfortable and painful they can be. Formed by crystals that accumulate in the bladder, kidney stones are what the body normally flushes out. The acidity of apple cider vinegar helps soften the hard tissues that prevent bladder stone removal. So how much do you need? According to experts, two tablespoons to an 8 oz glass of water drunk throughout the day should do the trick.

From alleviating leg cramps to giving you energy, ACV is high on potassium. Foods high in potassium can help combat the risk in high-salt diets. Mix 2 tablespoons of ACV in a glass of warm water and drink once a day.

A green way to clean, apple cider vinegar makes for a great disinfectant. According to this study, ACV was the most effective cleaner in helping prevent the growth of bacteria. So how should you make it? Dr. Norman Miner, a researcher MicroChem Lab Inc. in Euless, Texas, suggests first diluting 1 oz of bleach, then adding 1 gallon of tap water before finally adding in 1 oz of ACV.

Like a calcium supplement, the acetic acid in ACV can help your body’s ability to absorb calcium. Studies back this claim. Using ACV as a supplement to your calcium supplement and daily diet would be especially beneficial to people who are lactose intolerant.

Though not backed by science at this time, there have been accounts of people saying that a teaspoon of apple cider vinegar in a glass of water has helped them move freely and without pain.

A balanced pH can reduce your risk of cancer, and will also give you clearer skin. As a toner, ACV is very close to the natural pH of our skin, slowing it to do its job without being harmful. Apply one part apple cider vinegar to three parts water and rinse your face after cleansing.

ACV is a liver and lymphatic tonic, so if you’re looking for an ingredient to put in your detox drink here it is. ACV helps balance your body’s pH as previously mentioned, as well as increases bowel function and cardiovascular stimulation. It also increases lymphatic drainage.

If you’re suffering from warts that just won’t go away, an effective method is apple cider vinegar. Soak a piece of cotton ball in apple cider vinegar and put it over the wart and seal with a band-aid. Leave on all day and night, and replace once a day. Results are varied, but people have seen warts die in as little as a week.

18. Soothes and dries up poison ivy

If you’ve ever had poison ivy you know how difficult it is to get rid of, and no treatment seems to work. While apple cider vinegar isn’t a miracle cure, it does soothe the itching and the burn of poison ivy, and combined in a paste with baking soda it can shorten your poison ivy’s lifespan. Just mix a teaspoon baking soda with a teaspoon of apple cider vinegar, apply to skin, and leave on for about a half-hour to an hour two times a day.

Loaded with vitamins and probiotic boosting properties (that acetic acid again), it’s a great natural cure. Just like with allergy relief, mix two tablespoons in a glass of water and drink three times daily to fight your cold.

In a test done on 100 teeth that were exposed to E. faecalis, apple cider vinegar was able to reduce the amount of bacteria. While not able to completely remove it, ACV did remove a substantial amount.

Apple cider vinegar’s lengthy list of uses makes it a great item to keep around at home, and the multitude of ways in which it can be ingested make it easy to use every day. While not a “miracle” or a “cure-all” like it has been touted, its effectiveness means that it may as well be. So if you haven’t bought apple cider vinegar yet, consider adding it to your next grocery list and seeing for yourself all the wonders that it can work.